Just yesterday Gwen Stefani posted the first video-single from her upcoming album. We dunno the title or especially a track-list, but already like this catchy single! Can’t say it’s same great as 4 In The Morning or old-school What You Waiting For, but still not bad, right? Watch and listen below. Don’t forget to buy a single on iTunes and soon pre-order the new album. We didn’t hear a thing from her for long 8 years!

Gwen Stefani is best known for being the lead vocalist of No Doubt and, of course, for her rock hard abs. Founded in 1986, No Doubt has achieved great success, and are still putting out music and touring today. The band, however, did take a hiatus from 2004-2008. During that time, Stefani decided that she wanted to make a “quick dance record.” Instead of the quick project she originally planned, Stefani ended up collaborating with a number of artists and put out two solo albums: Love. Angel. Music. Baby. and The Sweet Escape. This years on 3rd october she reached 45. Could you guess it? We never!

And yes, you’re not crazy, we found a lot of product placement in this video as well! Look at this long list and proofs! 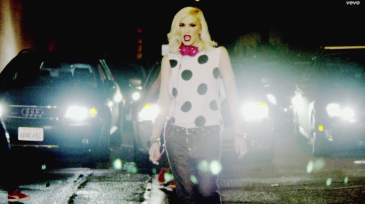 Watch this 10 great singles from Gwen’s solo career. Which one would you prefer? Out TOP is here.

WHAT YOU WAITING FOR?